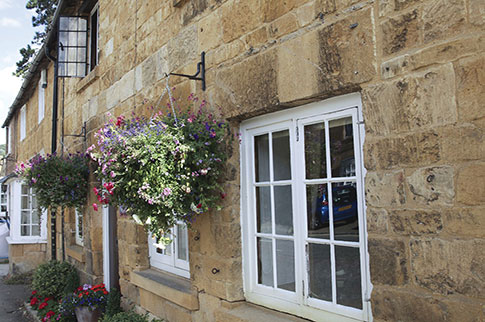 Stone has been quarried in the Cotswolds since Roman times and is a Jurassic limestone rich in fossils, particularly sea urchins. The stone varies considerably in colour, being brown in north Oxfordshire, grey in north Gloucestershire, honey coloured in villages such as Stanton and Broadway, golden in the central and southern areas such as Dursley and Cirencester, and a paler cream or even pearly white in Bath.

In the 13th century, local stone was used to build Oxford’s colleges and later Eton College, Windsor Castle and Blenheim Palace. The landmark Radcliffe Camera building in Oxford was built using both Taynton and Burford limestone, while further south, the quarries at Corsham supplied stone to the city of Bath. Stone from Minchinhampton was used for the Houses of Parliament and that from Leckhampton was used to build the spa town of Cheltenham.

Cotswold stone is still very highly regarded and specified in building construction today as it easily splits into blocks and is quite weather-resistant. However, a common failing we notice during our surveys is that stone houses are often re-pointed using a cement rather than lime-based mortar. Mortar fills in the gaps between the stone, bonds the masonry together and ensures the loads are evenly spread. Solid walls fulfil their weatherproof function by their ability to absorb and release water. Therefore, it is important that the ‘breathability’ of the stone is not inhibited and that the correct type of mortar is used. Lime mortar has some flexibility and, when exposed to rainfall, will act as a wick extracting moisture from the masonry to prevent water retention and dampness.

The stone buildings of the Cotswolds embody the best of English craftsmanship with their unique building style including a steep pitched roof (60 degrees), ridge tiles and coping, tall chimneys, large window sills of stone or wood and detailed window mouldings. Although stone built homes tend to be around 40% more expensive than those made of brick, stone tends to mellow over time creating a real warmth and charm to the villages in the region.