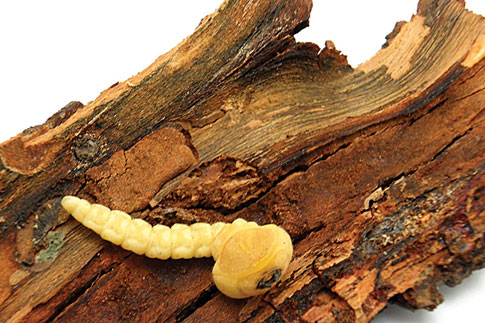 Woodworm is the larval stage of certain wood-boring beetles, rather than a specific species, the most prevalent being the common furniture beetle…

Woodworm is frequently introduced into houses in second-hand furniture, tea chests or wicker-work. They may then attack floorboards, joinery and, more seriously, structural timbers such as rafters and joists. There are four stages of woodworm development: egg, larva, pupa and adult beetle.

The first sign of woodworm is the appearance of neat round holes, the size of which varies, but are typically 1mm to 2mm across, in wooden surfaces. Live infestations show wood dust (faeces), known as frass, around the holes. These holes are made by emerging adult beetles, while immature grubs may still be tunnelling inside the wood. The adult furniture beetle is a small brown flying insect, 3mm to 6mm long. It lays eggs on rough, unpolished wood and in cracks in wooden objects, floorboards and timbers and the grubs bore straight into it, leaving no trace until they emerge as beetles three to five years later, usually between May and October.

Other wood-borers include Death Watch Beetle, which infests only large old hardwood beams, such as oak, which are damp and have previously been infected by fungal decay. As with more common wood-boring beetles, they can only exist as long as the wood is moist enough to sustain life. A building with a woodworm problem in the structure or furniture probably also has a problem with excess damp. Woodworm infestation is generally controlled with chemical insecticides. However, it is also advisable to investigate and solve possible damp issues, as dry wood is not usually affected, and wood that remains damp may be re-infected at a later date. As long as your home is heated and ventilated to normal modern standards, any infestation should be only temporary.