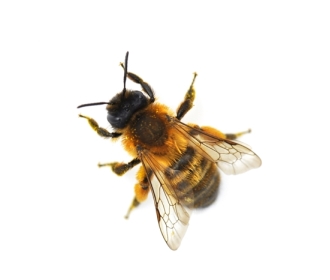 Mortar bees, or Masonry bees, are so called because they sometimes burrow into the mortar joints in brick walls. In Britain there are nearly 20 different species, the most common being Osmia rufa (the Red Mason Bee). They are solitary so do not nest in colonies, but within individual holes. The bees favour sunny, south-facing elevations as this enhances the germination of their eggs.

In appearance they are similar to honey bees and share the same soft brown and yellow colouration, as opposed to the bright yellow and black of the wasp, with which mortar bees are often confused.

Mortar bees are opportunist, often using existing holes and crevices, such as drill holes and gaps around windows and doors, so will not necessarily cause significant damage. However, although solitary, the females are attracted to sites with other females present, so their annual burrowing may create an extensive system of holes. These may fill with water that expands on freezing and causes deterioration. Birds may also attack walls to feed on the bee larvae.

Where there are numerous nesting holes, which threaten the fabric of the building, then remedial action may be required. Chemical treatment alone is not always effective and as well as being environmentally unfriendly, may stain masonry. Mortar joints should, therefore, be raked out and re-pointed, preferably in late summer or autumn. The mortar should be hard enough to discourage the bees, but not too strong for the bricks. As female mortar bees often re-use their nesting site, this should help to break the cycle. The provision of artificial nesting boxes on or near walls can also help entice bees away from existing sites.